The ecosystem in the game is not static at all; it is an ever-changing environment. Players walk around to harvest plants and other natural resources and the system tries to replenish those, not necessarily at the previously existed locations, but in anywhere appropriate. This is where the Ecosystem Simulator comes into play; it takes the current environment as an input, performs some calculations, and produces the outcome.

Now, imagine the environment on which the game server code is deployed. We certainly have more than (a lot more than) a single machine. Running the Ecosystem Simulator entails a variety of challenges due to the sheer volume of computations.

We had two major goals in our mind:

In summary, this is an overview of the architecture that we have settled on. This may not be obvious at first glance, but we will dive into each component and explain what kind of technical problems we faced and how we came up with plausible solutions.

Player activities are something we can hardly predict accurately. Sometimes a lot of players move around and destroy the forest, and sometimes not many players are around.

We have provisioned a certain number of ECS agents, which determines our compute capacity. When we go over the limit, it will not be able to run any additional tasks and we are going to have missing tasks, which translates into un-replenished, empty spots in the game world.

To alleviate this problem, we brought the SQS into the picture to act as a buffer between the producer and the consumer. Here, the producer is the game server and the consumer is the ECS cluster. Rather than having the game server directly invoke an ECS task, it inserts a request message in the queue and a Lambda function processes it subsequently. We need Lambda because SQS messages cannot invoke an ECS task by themselves.

In distributed systems, two things are very difficult to achieve:

In our case, the exactly-once semantics is relatively less of concern and the throughput was a lot more important, so we decided to go with the standard queue.

To make a side note, those problems can be seen as a mathematical problem, rather than a software engineering problem. If your operations are communicative, out-of-order messages in SQS won’t affect the final outcome. Likewise, if your operations are idempotent, duplicated messages won’t cause any damage.

In our case, the replenish operations are executed on a chunk basis, so the order in which they are carried out doesn’t really matter.

And the replenish algorithm is designed in a way that the marginal difference after each iteration asymptotically approaches to zero. This isn’t exactly a purely idempotent function in a mathematical sense, but in practice, executing the replenish operation twice instead of once produces an acceptable outcome. It looks ‘good enough’. Message duplication is an exceptional case rather than an average case, we decided not to worry about it too much. So the standard queue was a more reasonable choice for us. 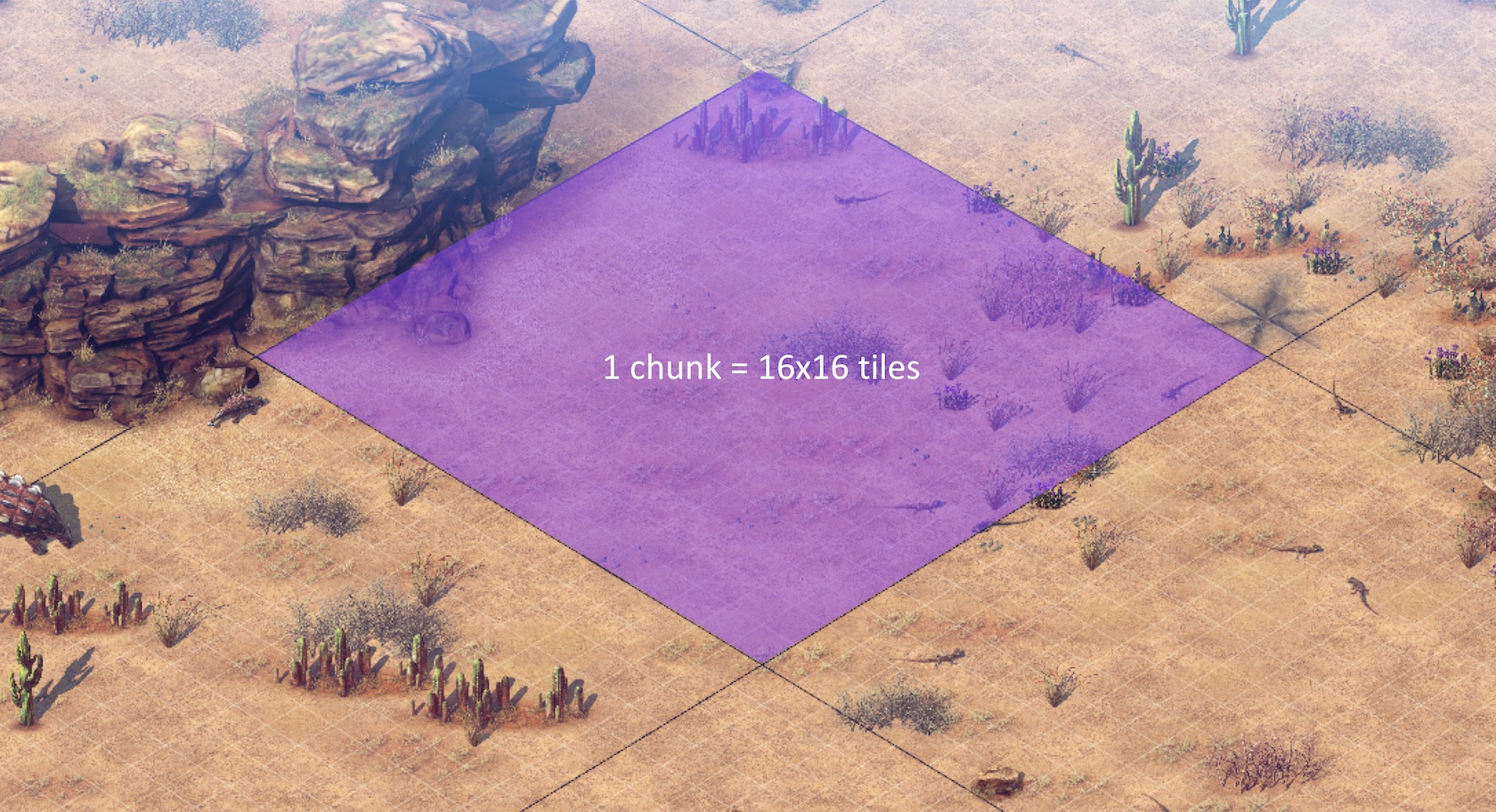 A tile is the finest granularity for object placements. A single object occupies one tile. A chunk is a pack of 16x16 tiles. A chunk is a basic unit for a workload. For example, our game server loads terrain data by chunk, and the Ecosystem Simulator does its job on a chunk basis. By dividing up a large island in small chunks like this, we can process any task in parallel, and most importantly, we can finish the tasks in a fixed amount of time, regardless of the size of the island, as long as enough compute power is provided and there are no inter-dependencies between tasks.

This article is a simplified version of the following public speeches. For more detailed information, you may consult these: